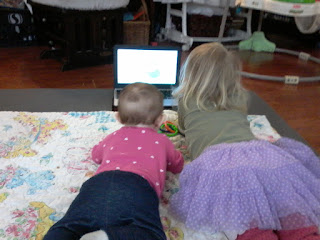 Pixie and LouLou- Pixie was more interested in the music than anything else. She loves music! My dad will play something like Music machine on his phone, and she will get all bouncy, and start kicking her legs harder. 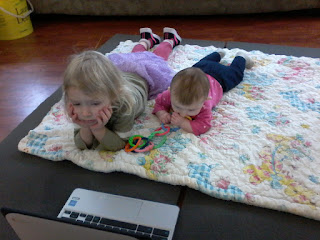 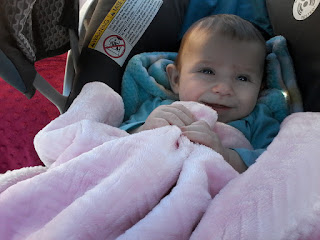 Smiling! This is a rather old picture-it's from conference, but I had to include it because she's adorable. 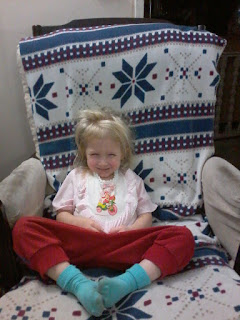 Bedtime...
She smiled knowing I was taking a picture, and this was the most natural looking picture of the few I took. in some of the pictures, she looked like she was grimacing. She's cute whatever she does though, so it doesn't matter her smile. 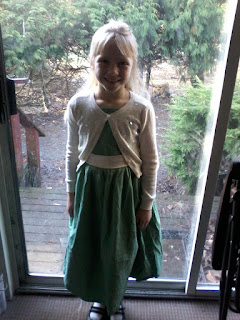 Ricka's actually wearing the exact same dress that I wore for my Aunt's wedding a couple of years ago, I think I was eight. Grandma C. made the dress, along with one for Emma, because we were the flower girls at the wedding. Later, after he wedding, she made a little one for then-baby Ricka, so we could wear them to meeting and match. Ricka has grown so much, (she's eight) now she fits my old one! One of these days, we'll open the too-small-for-Ricka box with the baby dress in it, and see if Pixie fits the littlest one. :)

I just realized that when Pixie is eight, (I don't know if this dress will still be here or not) I will be 23! Wow. That just makes me seem old. (I know, I know, 23 is not old for some -okay, most people reading this:) 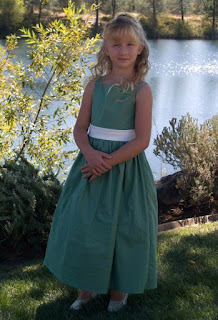 Me at my Aunt's wedding