Burbank Conference 2019 – The Trip to Burbank

We had been planning this trip for a couple of months. After packing, shopping, and much planning, our trip was about to start!

We left our house early December 18th (4:30 AM) to drive to Richmond to catch a travel bus down to Seattle, where we got on a train which would take us to Burbank.

On the bus, it was hard to take good pictures because it was still dark outside, but I did get a few pictures. I’m not going to say whether they’re good pictures or not, you can determine that for yourselves..

The bus ride was about 2 hours long, and we got to the train station in Seattle just in time, about ten minutes before our train left. 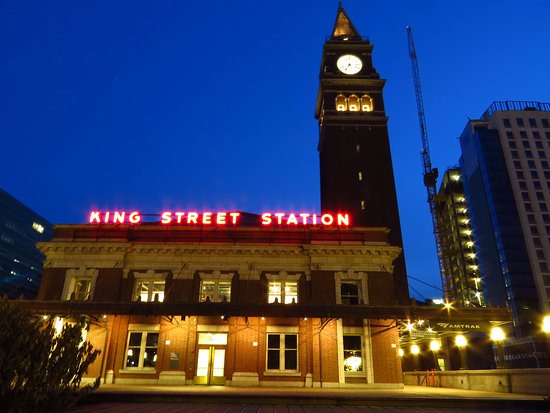 This is a picture of the Seattle train station at night. It’s called King Street Station.

We sat down in the train station, had a small snack, and then the doors opened for people to board. We had a total of 25 bags (suitcases, duffel bags, cooler bags, backpacks), so every transfer from car to bus to train was a group effort, and it had to be done quickly. Every last one of us, (except for Pixie, of course,) down to Loulou, had to carry a bag (Loulou’s bag was much much smaller than mine), and almost all the big kids had to carry (or roll) at least two.

We got on the train with all our stuff successfully, and then we were off!

Mama brought along a packet of coloured wax strings that you could make pictures with. This butterfly is Emma’s creation.

Our family has gone on a train a couple times before, the most recent one being two years ago to Regina conference, so some of the younger kids had little or no memory of the train. They had so much fun! We had packed a couple of bags of stuff to do on the train- word search books, colouring, small crafts, cards and other things. Loulou brought her own little backpack that she filled with toys, and she played with that a lot.

QB and Hal.
It’s really hard to tell them apart sometimes, especially when they match. 🙂

Pixie was very happy she didn’t have to be buckled on the train.

In total, we were on the train for 36 hours, or two days and a night.

It was super exciting the whole time, except for when you wake up at 3 AM because the train is at a bright station and the seat you’re sitting on is determined to make sure you’re uncomfortable all night long.
The next morning on the train was beautiful though, and everyone was in a good mood. Mama planned ahead and had a whole zipper cooler bag of food (maybe two, I don’t remember) for the trip, which worked out really well. We had bagels among other things for breakfast that morning.

The train bathroom didn’t have a changing table, so we had to find a compromise.
Pixie fit perfectly in the little sink.  🙂
I took a lot of pictures on my dad’s phone, and quite a few on Mama’s as well. I love taking pictures of anything, and I had beautiful scenery and lots of free time. It was so fun!

The trip is long over now, we are already back home, I’m just taking forever to get this posted.
Part 2 coming soon (ish)!