Molly's puppies reached three weeks old at the beginning of this week. (Monday or Tuesday, I can't remember.) About a week ago, their eyes started opening, and they can hear a little bit. They are all  fat, healthy, strong, and extremely cute. 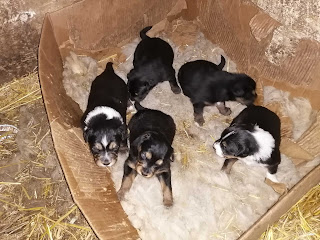 Butler turned 10 years old on November eighth, and the next day, Saturday, we had an oil fondue at the meeting room to celebrate. In case you don't know what a fondue is, it's where you heat pots of oil and fry different kinds of food in it. We had family from California and Saskatchewan visiting (Aunt Knittery's daughters, granddaughter, and sister, plus a few husbands) so we invited them all as well as our relatives here, which include Grandma & Grandpa on my dads side, Uncle Charles, and Aunt Knittery & Uncle B.

I had been babysitting earlier Saturday morning, and since I got off work at 2:30, we had to rush to leave on time because it takes 35 minutes to get to meeting, and we need time to set up once we get there. My dad picked me up and we went straight home, finished packing all the food into the van and left for the meeting room. By this time, it was around 3:30, so we got to the meeting room just after four o'clock. We were planning on serving dinner at five, so we had to hurry getting everything put together and set up. We managed, though. 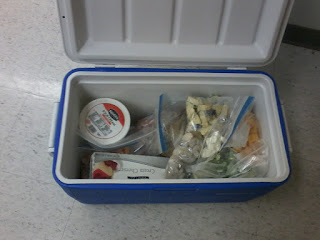 We took two of these chests full of food and other stuff for the fondue. 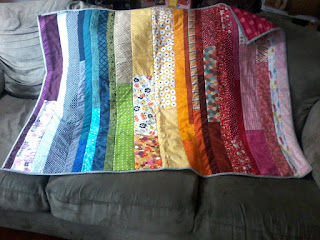 This is a baby gift from Aunt Knittery's eldest daughter, Aunt Carmen, for my mom and Pixie. She's made one for almost every baby my mom has had, including Ricka and Loulou. Isn't it gorgeous? She always does such a good job.

Grandma brought a salad that was soooooo good. It had feta cheese and crumbled bacon in it. Yum!
We had all kinds of food to cook. Sweet potato, broccoli, cream cheese, all different kinds of meat and seafood, and lots of other veggies. Eggplant, zucchini, jalapenos, onion, mushrooms, we had everything! 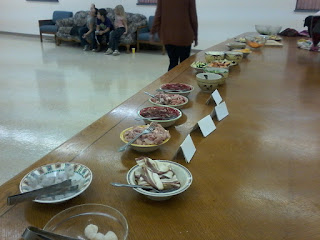 It was delicious, but we ended up having a lot of leftovers. That's all right though, because in a family as big as ours, extra food never hurts to have around. We can always make a stir-fry or something out of leftover food.

Aunt Knittery brought a fruit platter, and I experimented cooking different kinds of fruit in the oil. I fried a banana slice (it was really good) cooked an orange piece, and then battered and cooked mango and cream cheese together. It was delicious! Most people just took my word for it, but it really was good. :)

After everyone was filled with greasy unhealthied food, we visited and cleaned up after dinner. 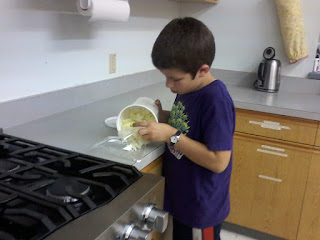 Aunt Knittery's granddaughter, little Lilac is adorable. When she first arrived Saturday, she was really shy and steered clear of all the other kids. She clung to her mom and stared at us, because she had only ever met us once before. By the end of the birthday dinner, she was running and playing along with the rest of them.

After the dishes were washed, we felt that we weren't being unhealthy enough, so we all got ready for cake: 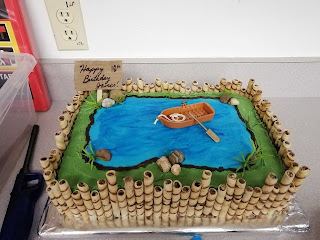 My mom made this cake in one day, and as we found out, it's really good. She's famous for her cake decorating. (not internationally or anything, just in the meeting :) 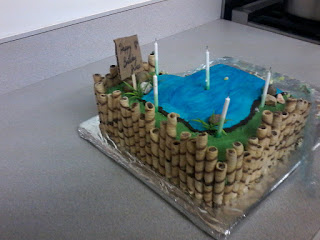 Then, we sat down to watch Butler open his presents. 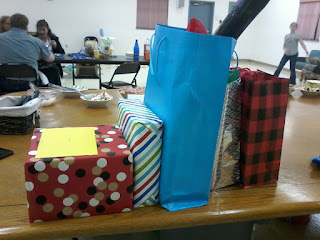 He got some really neat ones, too! He received a complete set of Little House in the Big Woods, and he's been instructed to start with Farmer Boy. I had a few of those books, but never a whole set. I really like them. 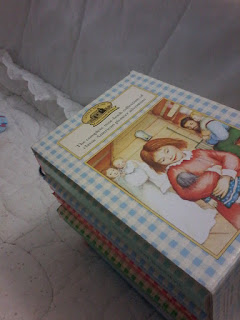 He also got a card game where you throw burritos, a Viking board game, and a neat flashlight. I'm sure there's more I'm forgetting, but they were all awesome and he loves them. Thanks, everybody!


We've celebrated birthdays with a fondue before, and it's always a good way to do it. It was really nice being able to visit with everyone, and just in general everyone had a great time. 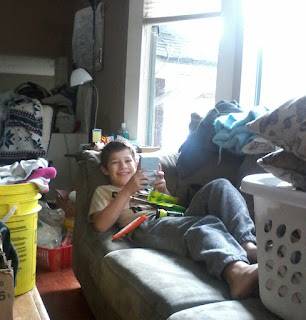 Happy birthday, Butler! It's hard to believe you're already ten!
Posted by Hannah at 4:27 PM 1 comment:

Its hard to believe that our little Pixie is already two months old. On September fourth she joined our family, and I can still remember that day. School had just started the day before, and she was born very early in the morning. Before Pixie was born, us kids told mama and daddy that they couldn't tell us the name or gender until we visited the baby at the hospital. We went to school like normal, and had to wait the whole school day in suspense! After school, we changed into either a blue or pink shirt, depending on if we thought it was a girl or boy, and drove off to meet our little sister. We were so excited!

That was exactly two months ago. :)
She's getting cuter by the day, and we love every minute with her. Okay, we don't love the fussy moments so much, but she's cute no matter what she does. 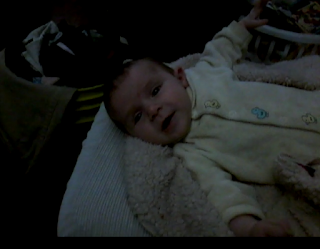 She smiles and coos a lot now. It's super cute! 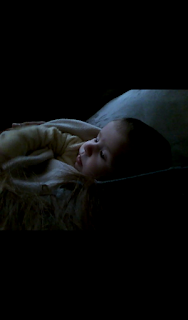 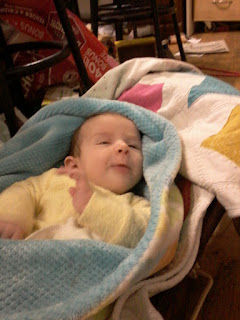 This Monday, Molly had puppies! We started out with eight, but a few died because they were weak, and now we have five strong fat puppies. They are purebred English Shepherds, which is a breed similar to the Border Collie.
They are doing well, and so is Molly. She's a good mother, and takes care of her puppies really well for a first time mama. 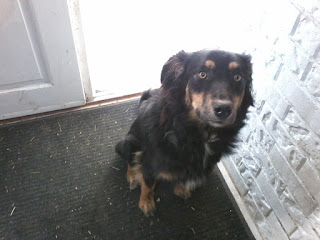 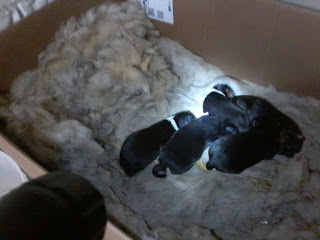